An excerpt From The Homeless Heiress 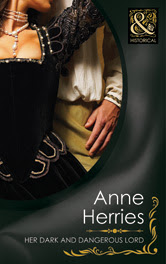 Her Dark and Dangerous Lord - my newest out book in UK


Here is an excerpt from The Homeless Heiress. One of my best selling Mills and Boon books. Still available in kindle.

Enjoy
Captain Richard Hernshaw paused, glanced back into the menacing darkness of the narrow alley behind him and frowned. He was being followed. The instinct he had acquired over several years working for the British government, as a secret agent, was on full alert. He knew that he was taking a risk by agreeing to meet his contact here in the rookery of these terrible slum streets, but the man would not dare to show his face elsewhere for he was a rogue and perhaps worse. The meeting had gone well and Richard had what he'd come for, but since leaving his contact, he had picked up a shadow. The question was – who was following him and why?
He needed to know the answer to that question, because of the papers he was carrying, which were important and could be the answer to a mystery that he and other colleagues had been searching for in recent times. It was feared that an attempt on the lives of several prominent men in the government and, even that of the Regent himself, was being prepared, and Richard believed that the names of the ringleaders were in the documents he carried inside his coat pocket. If the person following him knew that he had them, he might be in danger – of losing both the papers and his life.
Better to attack than be attacked! Richard turned the corner, and pressed his back against the wall, waiting for whomever it was to catch up with him. His suspicions were proved correct for an instant later a small, dark shadow came hurtling round the corner. He stepped out, and grabbed the rascal's arm, gripping it tightly.
'Let me go!' A voice cried in a tone halfway between anger and fear. 'Watcha think yer doin'?'
'That is exactly what I was about to ask you,' Richard said, his gaze narrowing at he looked down at the rather grubby face of a street urchin. He smiled as he saw the indignant look in the youth's eyes. 'You have been following me for a while now, lad. I don't like being followed unless I know why.'

The youth rubbed his hand under his nose and sniffed hard. 'Weren't doin' no 'arm, sir,' he said defiantly. 'Let me go or I'll kick yer!'

'You would be sorry if you did,' Richard replied. He hesitated, his hold slackening a little as he considered. A lad like this might be after his purse but he was far from the sinister enemy he had imagined. A smile was beginning to tug at the corners of his mouth when the youth lunged at him, kicked him in the shins and wrenched free, setting off at a run back the way he had come. 'Damn you!'
Richard realised instantly that he had been robbed. The boy's hand had gone inside his jacket, removing the package he was carrying seconds before the toe of his boot connected with Richard's leg and caused him to loosen his hold enough for the lad to break free. He felt a surge of annoyance - how could he have fallen for a trick like that?

Richard yelled and set off after the boy at once. He was angry that he had been so careless but there had been something almost angelic in the boy's face and he had been lulled into a sense of false security. Damned fool! It was the oldest trick in the book, using a boy to take your enemy off guard. He could see the lad ahead of him, running for all he was worth. He moved fast but Richard was a match for him, his longer legs and superior strength making it inevitable that he would catch the boy. And then fortune stepped in. In his haste, the lad had not seen the rubbish on the pavement. As his foot touched the rotting filth left there by some careless trader, his heel slid and his legs suddenly went from under him, sending him tumbling into the gutter. He was getting to his feet when Richard arrived, clearly none the worse for his tumble.

'Watcha want ter make me do that fer?' he complained bitterly. 'I ain't done nuthin', sir. Honest I ain't.'
'You stole something from me,' Richard said, holding out his hand. 'Give it back and don't try another stunt like that or you will get a good hiding. Do you hear me?' His strong hands hauled the youth to his feet. He gave him a little shake. 'Did you hear what I said, boy?'

'Me name's Georgie,' the lad said and sniffled. 'I ain't 'ad nuthin' ter eat fer days. I only wanted a few coins. If yer hadn't grabbed me I wouldn't 'ave done it.'

'Indeed?' Richard's eyebrows rose as he looked at the lad. 'Georgie, is it? Well, Georgie, had you asked I might have given you a shilling but you deserve that I should hand you over to the law…'

The lad produced the package, holding it out to Richard, who took it and replaced it in his coat pocket. The seal was still intact. It would have meant little to anyone who did not have the code and was able to decipher it, but he could not be sure the lad was not working for someone.

'Let me go, sir,' Georgie said, putting on the wheedling tone again. 'I swear I've never done nuthin' like that afore and I'm hungry…' He sniffed and wiped his nose on his sleeve. 'I didn't mean no 'arm…'

'What you meant was to steal from me,' Richard replied with a stern look. 'But I have the packet back and if you are truly hungry I shall feed you.'

'Give me a shilling, sir, and I'll trouble you no more.' Georgie's hand shot out.

Richard was on the point of putting his hand into his pocket when something made him hesitate. There was something about the urchin that did not ring true, though for the moment he could not place it.

'I'll not give you money,' he said. 'But I shall feed you. We'll go to an inn I know. Not here. I don't trust the service in these drinking dens. I'll take you somewhere we can both enjoy a meal.'

The lad hesitated and for a moment Richard thought he would try to run away, but then he shrugged his shoulders. 'All right, if that's what yer want, sir.'

'Come with me then,' Richard said, taking hold of his arm. 'And don't try to run away, Georgie – no funny tricks, do you hear? This package is important to me but it would be of no use to you. Try stealing from me again and I shall not be as forgiving next time.'
Posted by Linda Sole at 09:57