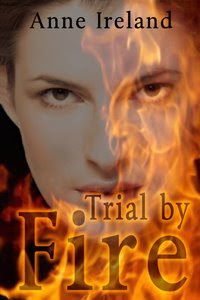 This is a historical timeslip. The story alternates between Ally, a modern woman who needs to recover from an accident, and Isolde, a woman condemned as a witch in the fourteenth century

As she went down to the hall, Ally heard someone laugh. It was a pleasant sound, youthful and joyous. Where had it come from? The door to the sitting room was open. She walked in, half expecting to see a child at play, because it had surely been a child's laughter. The room was unoccupied, but the tiny, latticed window had been left open a little at the top. Of course, that was why she had heard the laughter. Sound carried a long way at night. Her neighbour probably had children.
Ally smiled, picked up another suitcase, and carried it upstairs.
“Why do you always smell so sweet? Why does your skin have the perfume of flowers?”
Ally froze as she heard the whisper. The voice was a man's―a man talking to his lover.
Laughter and now, whispers! Ally's skin prickled as she stood on the threshold to her bedroom. The voice had seemed to come from this room. But, it couldn't have. She had been into the room; she knew it was empty. Perhaps one of the other rooms? Was it possible that someone had been squatting here?
Putting down her case, she walked along the hall and looked inside the other bedrooms. They were both neat and clean, as pristine as when the agent had showed her the cottage. No one was in the house. It was her imagination.
Ally went back to the bedroom. It was quite empty. She was alone in the house. She hadn't heard that whisper. It was all in her mind.
Perhaps it was the book beginning to take shape at last. The explanation was one she could live with, because it had happened occasionally in the past. Not whispers exactly, but thoughts that came out of the blue and were so insistent, so loud in her head that they might have been spoken.

Linda
sorry to go thorugh this route, but I dont have an email for you. Can you email me margaretwest@hotmail.com we have a blog sceduled and you gave me no date for november. Thanks.